I Love My Mummy 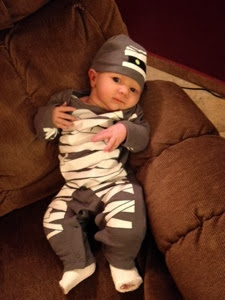 Happy Halloween!
Posted by JoAnna Wahlund at 7:10 PM No comments:

Email ThisBlogThis!Share to TwitterShare to FacebookShare to Pinterest
Labels: Halloween

An Encounter at the Mall

One aspect of our clubfoot journey that's made me the most apprehensive is how strangers would react to Peter's casts (and later, his boots and bar). I've heard some horror stories from other clubfoot moms about strangers asking them why they broke their baby's legs, or who dropped their baby, and so on.

So far, I haven't had any negative comments. Most people, when they see his casts, just ask what happened in a concerned, non-accusatory manner. Some just ignore them completely, although I can tell they're curious. (In that case, either Collin or I will take the imitative and tell them he was born with clubbed feet.)

At William's first T-ball practice the other night, a lady started playing with his toes. I was a little weirded out by it but didn't say anything. When she realized what she was doing, she apologized and said she was a nurse, and it was an autopilot reaction -- she was making sure the casts weren't cutting off his circulation!

Something I wasn't expecting was to have a very positive encounter, but that's exactly what happened a few days ago.

Collin and I went to the mall so he could get his iPhone checked out at the Apple store. Afterwards, we were sitting on a bench and I was nursing Peter. I was wearing a nursing cover but his little legs, in their plaster casts, were sticking out.

A woman, probably in her late fifties or early sixties, stopped in front of me and said, "Wow, that brings back memories." I thought she was referring to nursing and I just smiled, but then she continued, "My son wore casts on his legs too. Your baby was born with clubbed feet?"

My jaw dropped open for a second, but I recovered and answered, "Yes, he was!"

She told me that her son was born with clubbed feet about twenty-five years ago, and got his first casts when he was several weeks old. "But he's just fine now," she told me. "You'd never know anything had been wrong. He plays a lot of sports."

She was surprised when we told her that Peter had gotten his first casts when he was three days old, but saw the wisdom in starting early.

As she left, she said, "Hang in there! Soon all this treatment will be nothing but a memory. It really goes by so fast."

We didn't get her name, which I regret now, but it was a pleasant encounter to meet another mom who'd been there and gotten through it just fine.
Posted by JoAnna Wahlund at 11:39 AM 1 comment:

I took Peter in for his third set of casts today. For a pleasant change of pace, we barely had to wait at all and the entire appointment, casting and all, took about an hour! That's amazingly fast compared to our prior experiences. For example, I had to wait a hour and a half before his casts were even taken off during our first casting appointment.

Dr. Segal was pleased with the progress Peter has made so far. His feet look better and better each week! I don't know yet how many more casts will be needed, but I'm hoping it will only be 2-3.


He's been fussy this evening, as expected, but I've been carrying him most of the evening in my Baby K'Tan carrier and that seems to help. (Incidentally, I've found the Baby K'Tan to be an excellent carrier during the casting phase - the hug position seems to work best.)

Posted by JoAnna Wahlund at 7:21 PM No comments:

Two Sets of Casts and Counting

Peter's first casting appointment was October 10, 2013, when he was 3 days old. I asked Dr. Segal if we could start the casting as soon as possible, so that we could hopefully be done with the casting phase of his treatment before I have to go back to work.

I was apprehensive about the appointment because my milk hadn't come in yet, so pumping enough for a bottle to give him while the casting was going on wasn't an option. I'd intended to bring a pacifier to help soothe him, but forgot it at home. I nursed him immediately before the casting began but it wasn't enough; he was very unhappy and screamed the whole time. :( I felt awful and cried the whole way home.

As I'd been warned, he was very fussy that night and the next day, but he was his normal mellow self again within two days. After nearly a week in the casts they didn't seem to phase him a bit. I found diaper changes a challenge, though; poop gets on the casts no matter how careful I am, so the tops were stained yellow. Thankfully no poop has gotten in the casts. A few other clubfoot moms have recommended putting Saran Wrap over the tops of the casts to protect them; I may try that.

We had round two of casting earlier today (October 18, 2013) and it went MUCH better. I was able to pump 4oz of milk this morning, so I had the bottle in addition to a pacifier. I also played soothing music on my iPhone and that seemed to help as well. He didn't make a peep while they did his left leg. He fussed a little bit while his right leg was being done but then fell asleep during the process! It was a welcome change from the first casting experience.

Dr. Segal was away from the office this week, so Peter's casting was done by Dr. Belthur, who just started at Phoenix Children's Hospital in August (I met him at my initial consultation appointment; at that time, he was just shadowing Dr. Segal and hadn't started seeing any patients yet). Dr. Belthur told me that he studied with Dr. Ponseti himself in the early 2000s. He told me that he and Dr. Segal were competing to see who could make the best casts, so I need to keep an eye on Peter's and compare their work.

I took this picture of Peter's feet the day he was born: 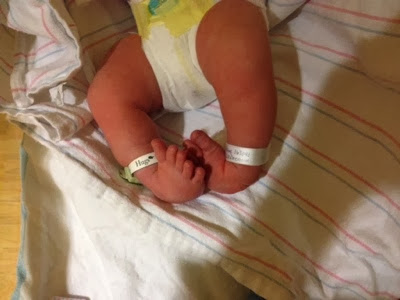 Here's a picture of his feet today, after the first casts were taken off: 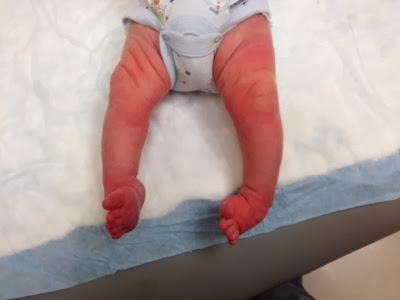 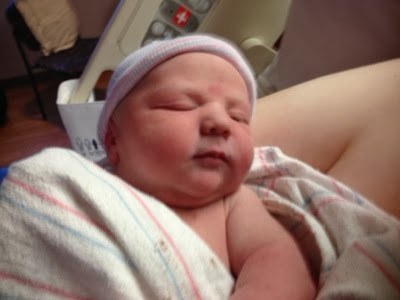 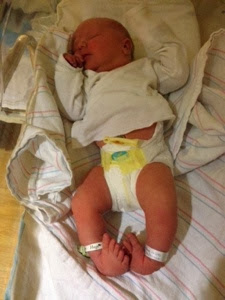